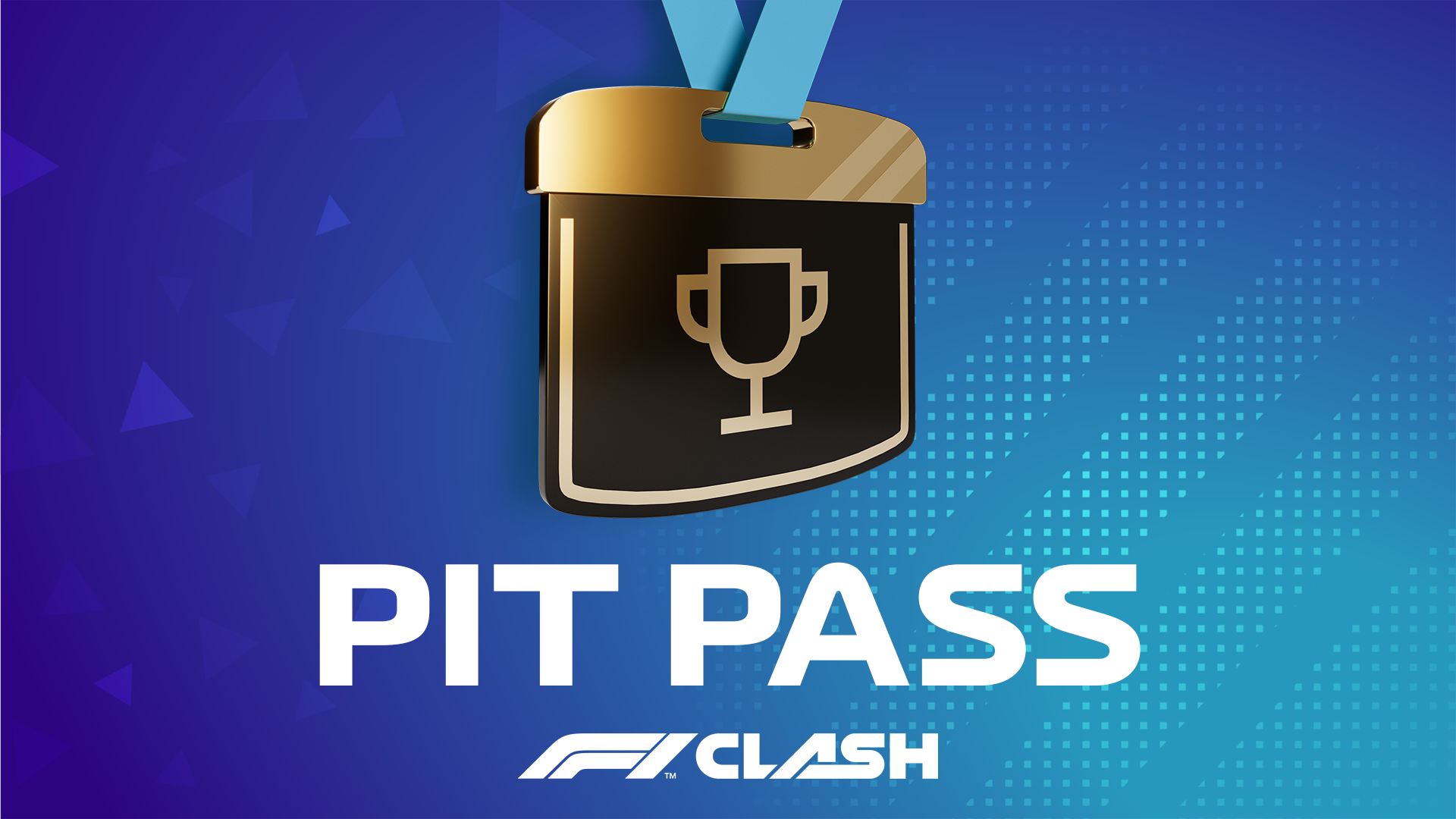 Recently we announced the upcoming introduction of Pit Pass - Our next big feature coming soon to F1® Clash. To answer many of the questions you may have prior to its launch, we've put together this comprehensive blog post outlining what Pit Pass is, how it works, and what benefits it brings to Players.

What is Pit Pass? 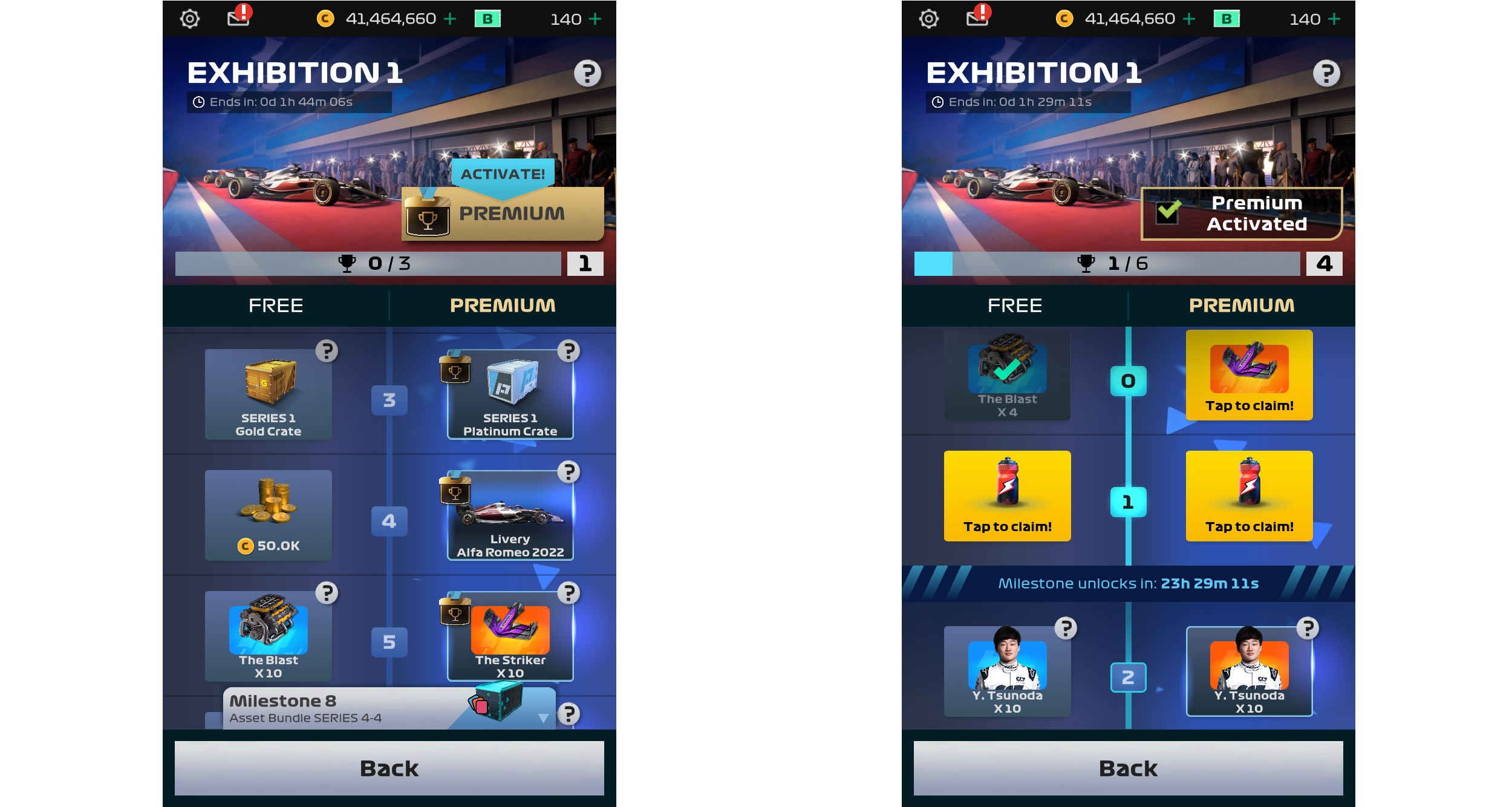 There are two milestone tracks - the Free Pit Pass and the Premium Pit Pass.

Rewards on the Free Pit Pass can be claimed for free as you collect Trophies and complete milestones.

Rewards on the Premium Pit Pass are locked by default and can only be claimed after activating the Premium Pit Pass via an in-app purchase. You can upgrade to Premium at any point when a Pit Pass is active, and claim all the rewards that you reached up to your current milestone! 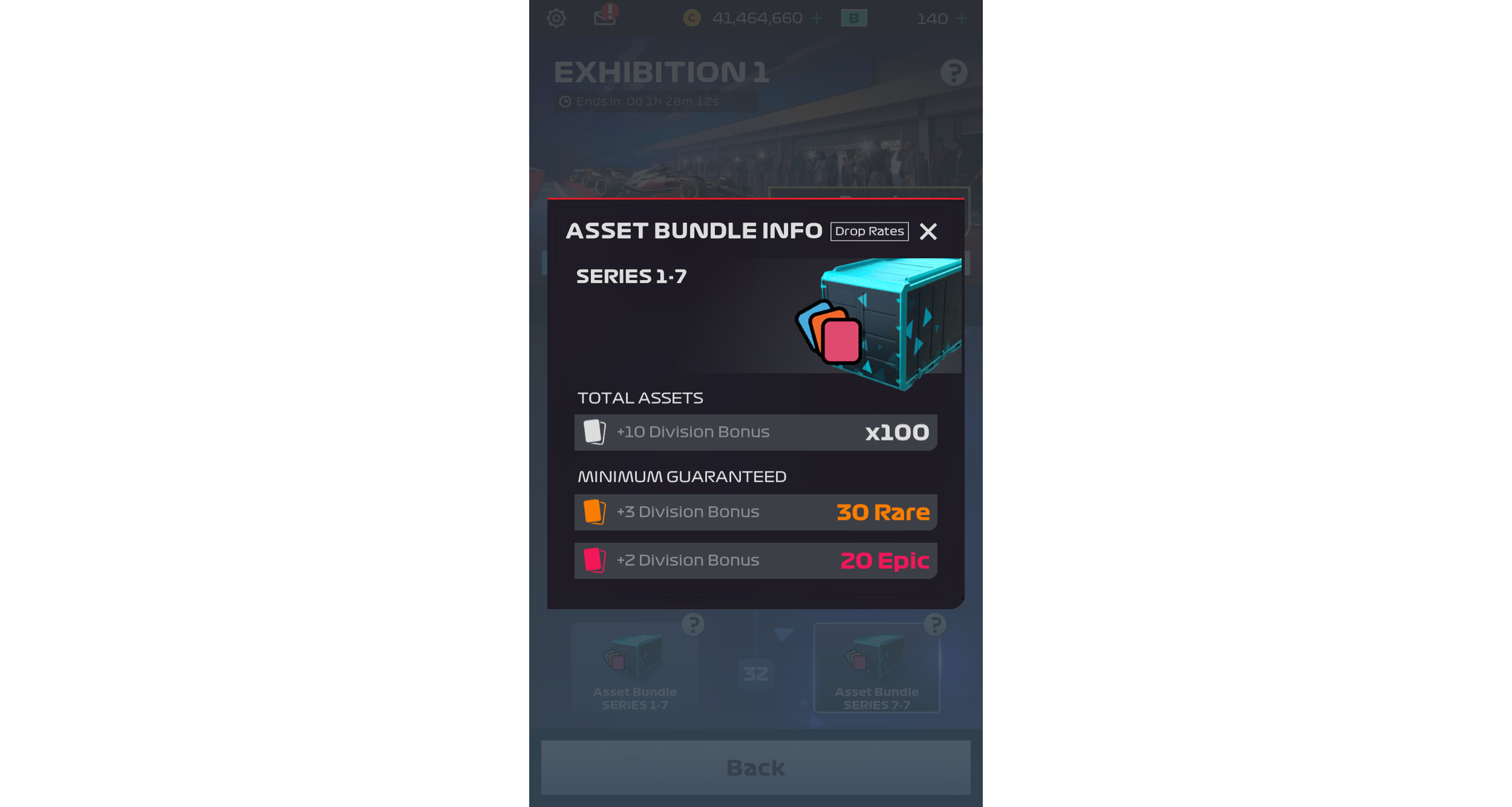 How do I progress in the Pit Pass?

To complete Pit Pass milestones you need to collect Trophies.

Trophies are awarded for every race in Events, regardless of the selected difficulty tier. The number of awarded Trophies is the same as in Duels.

No Trophies are awarded for forfeiting a Race.

The number of Trophies required to complete milestones increases as you progress in the Pit Pass.

Rewards can be claimed after the end of a Pit Pass, however, Trophies cannot be collected anymore once a Pit Pass expires.

How does time restriction work in the Pit Pass?

Reward milestones are locked by default and will unlock periodically over the course of each Pit Pass.

One milestone becomes available every 24 hours on weekdays and two milestones unlock on Saturdays and Sundays.

Milestones can be completed while being locked due to the time restriction but rewards cannot be claimed.

The collection of Trophies is in no way limited and you can collect as many as you like every day and continue to progress on the milestone track. The restriction only applies to claiming rewards!

Make sure you log in every day to maximise your earnings!

What do I get for purchasing the Premium Pit Pass? 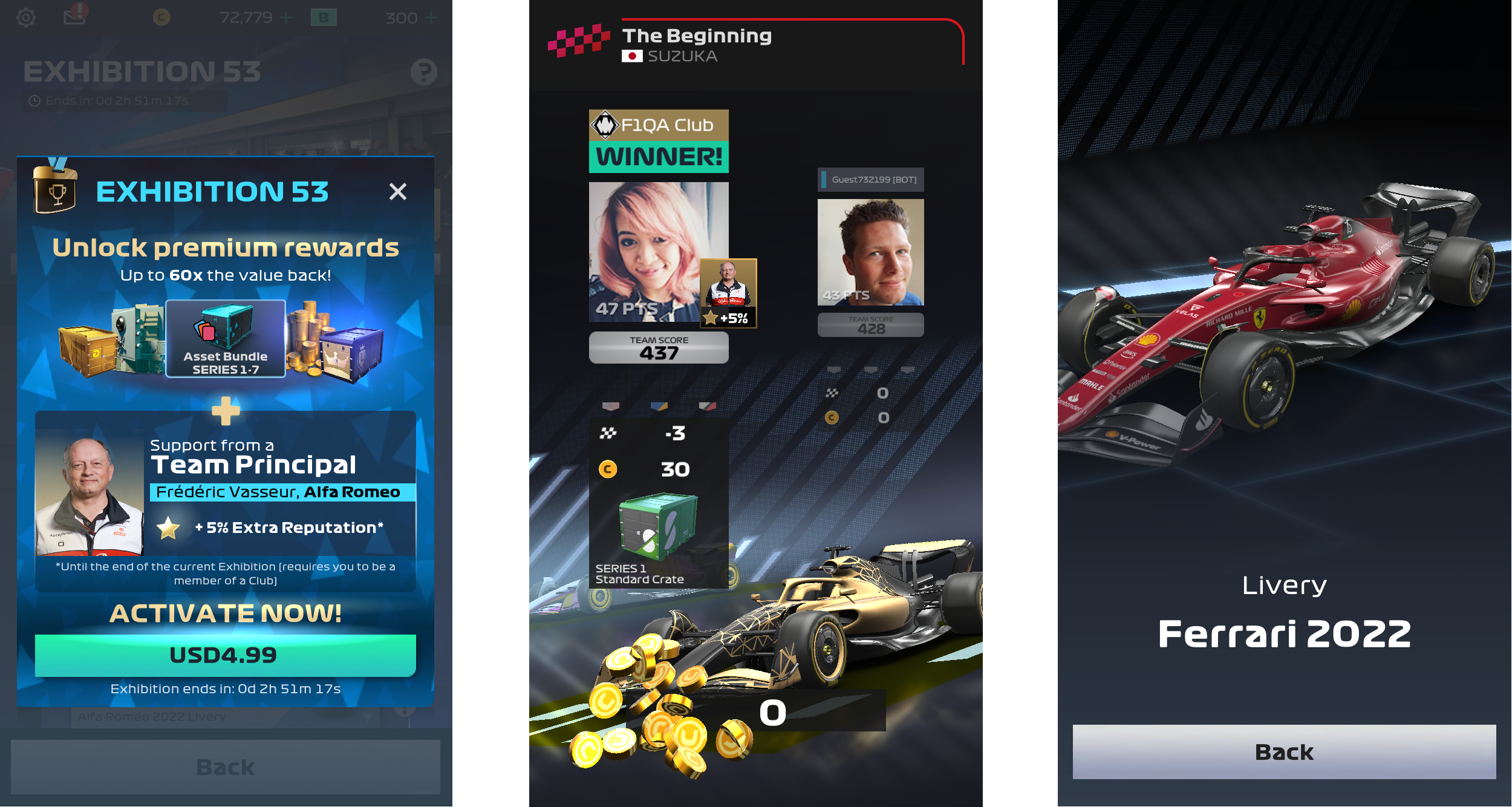 Purchasing the Premium Pit Pass grants you extra rewards as you progress.

Besides the extra Reputation, the Premium Pit Pass provides a valuable reward to claim for every completed milestone.

Keep an eye out for exclusive F1® liveries! Unique items will be featured regularly, keep an eye out as some may never appear in the game again.

Liveries collected from Pit Pass milestone rewards remain in your inventory after a new Season begins.

Premium Pit Pass eligibility expires at the end of each Pit Pass.

How can I activate the Premium Pit Pass?

The Premium Pit Pass can be activated from two different places:

It is advised to leave enough time for yourself to get the maximum value out of your Premium Pit Pass purchase. 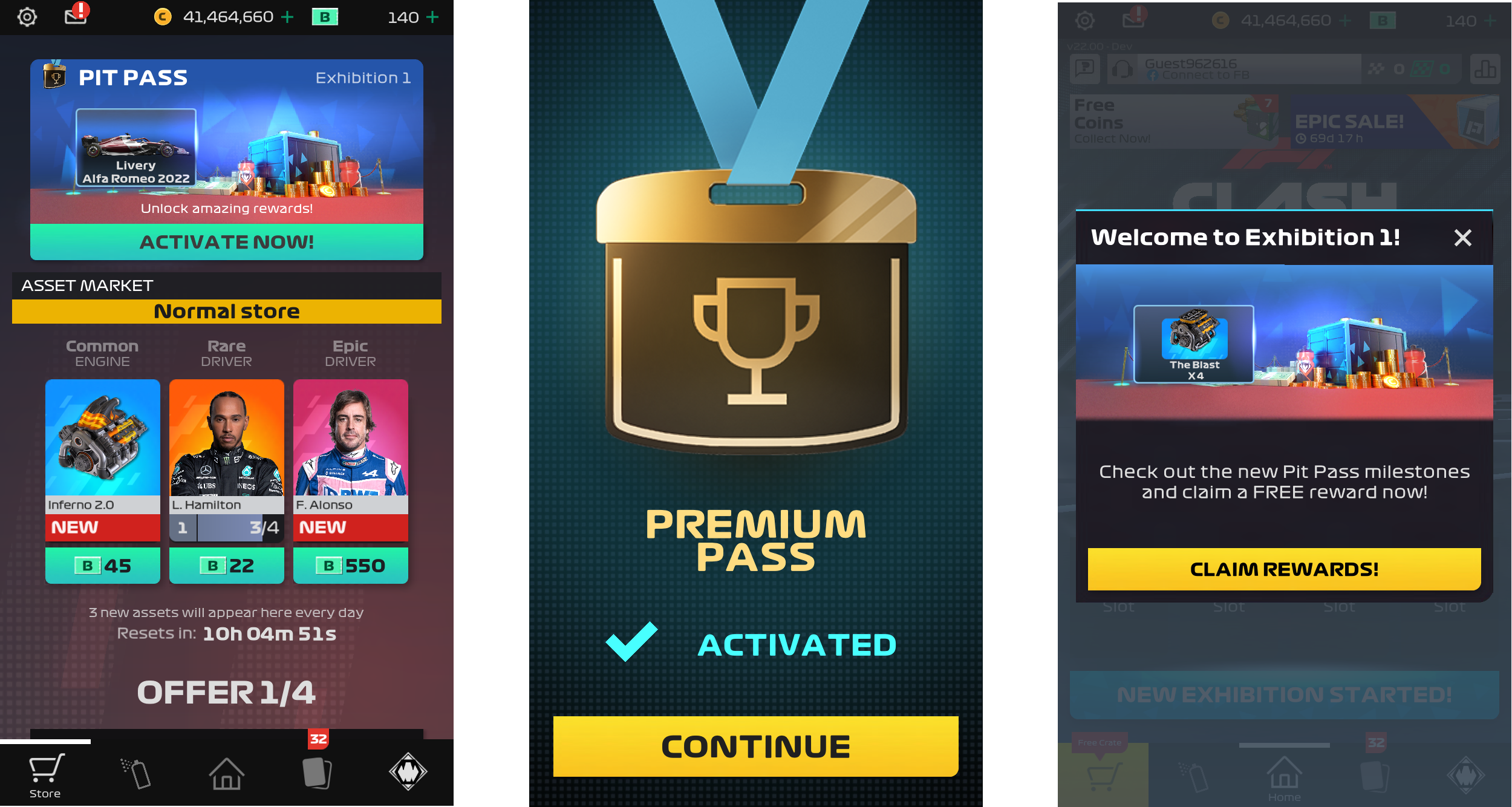 Do I lose unclaimed rewards at the end of a Pit Pass?

Unclaimed rewards can be collected after the end of a Pit Pass.

Once a Pit Pass ends, players must leave it to be able to participate in a new one.

To leave a Pit Pass, tap the ‘Leave Pit Pass’ button at the bottom of the milestone screen.

We recommend double-checking your milestones at the end of a Pit Pass as leaving without claiming your rewards results in losing your well-deserved prizes.

Why can I no longer see Free Crates and Race Crates on the Home Screen?

Previously we had Race Crates to reward Players engaging with the game and completing races. However after extensive analysis of Player data, we have found that Race Crates were actually hurting balance between newer and more experienced Players, because Players who had progressed further in the game could get more crates than newer Players. With Pit Pass, Players of all levels will have the potential to get similar rewards, which will help stop the expanding gap between newer and more experienced Players.

We have calculated that over the course of a Pit Pass, rewards via the free Pit Pass will be on average the equivalent of 45 Race Crates. There will also be the opportunity to earn via Pit Pass not only Epic Assets, but also other exclusive rewards such as liveries and asset bundles only via Pit Pass. Neither of which were available from Race Crates.

We strongly believe that Pit Pass will be not only more fun, but also more rewarding and engaging for the majority of Players at all levels of the game and we’re eager to hear your feedback about Pit Pass upon it’s launch.

As for Free Crates, they are still in the game but now they can be collected via the Store instead of the Home Screen. 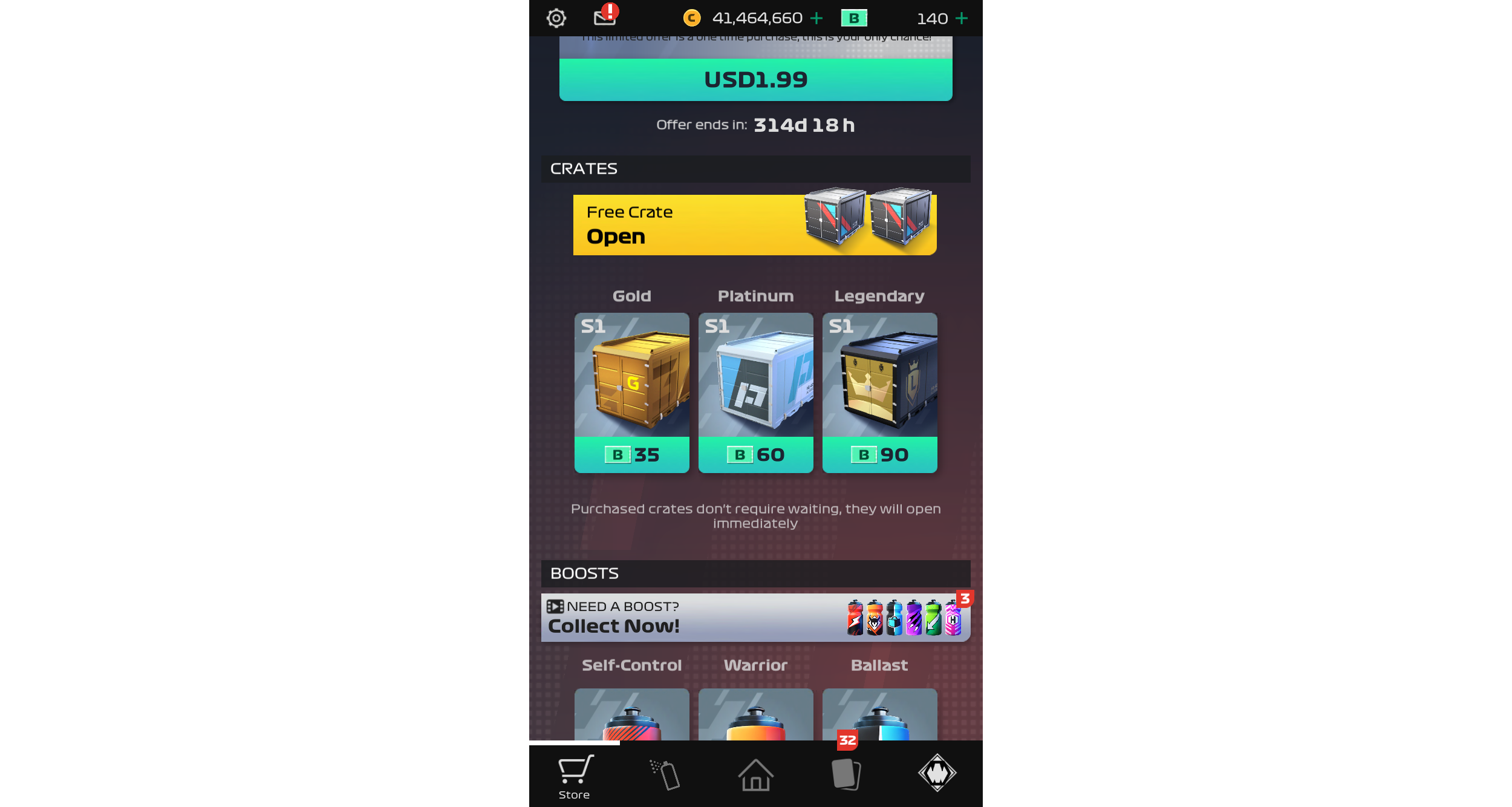 Here on the F1® Clash team we're super excited about the introduction of Pit Pass and we hope after reading the blog post you are too!

Note - All screenshots are "Work in Progress" with rewards and prices still to be finalised.