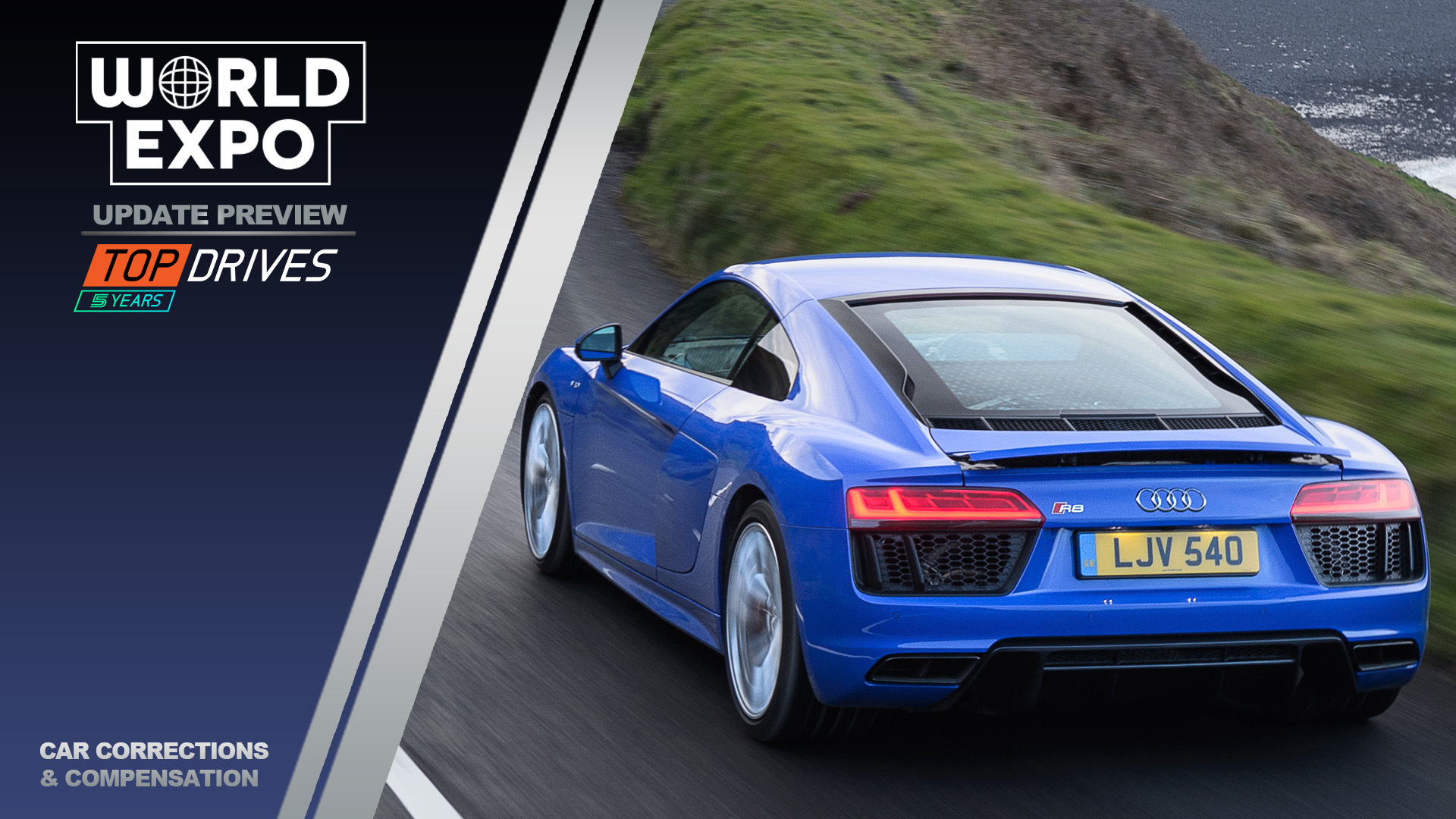 Today, we’re excited to give you the full details on the upcoming Car Rarity Token Compensation feature, which will be available in Top Drives 15.0 World Expo update!

One of the core pillars of Top Drives is authenticity - our goal is to bring as many officially licensed cars from around the world as possible for you to collect and race, and portray them as accurately as possible in-game. The data we gather on these cars is not always perfect - as such we are constantly improving the accuracy of the car statistics and rebalancing RQ to accommodate new cars. That’s why some cars' stats and rarities will be changing in the new update.

In previous years, we released car corrections with every major and some minor updates, however there haven’t been any corrections since the release of 14.0 Japan Pro Tour update in September last year, let alone RQ and Rarity changes affecting the highest RQ cars. The feedback was that corrections were too disruptive to the game’s fairness, with existing upgrades losing or gaining too much value when a car would change rarity. We have developed a system that will compensate you for rarity changes with upgrade and fuse tokens.

A car’s upgrades will be reset and compensated in tokens if a car you own changes rarity. When this happens, the car’s upgrades and fuses will revert back to zero. You will then be awarded Upgrade Tokens and Fuse Tokens. You will receive tokens equal to the number of the car’s upgrades and fuses. The tokens will correspond to the car’s rarity prior to its correction. You can then use these tokens to upgrade and fuse any eligible car of the same rarity. New cars from the 15.0 update are not eligible for token usage.

For example - let’s say you have a car in your garage that was an Epic prior to the 15.0 release, but as of the update, is now a Legendary. Your car was previously tuned as a 3.3, 3.3, 2.3 - meaning its engine and weight were fully upgraded, and its chassis was upgraded to the 2nd fuse level. The car would have its upgrades reset, and you would receive 24 Epic Upgrade Tokens and 5 Epic Fuse Tokens.

Note: the expiry time in this screenshot is for development purposes only. Tokens expire after 31 days - more info further below.

As part of the token compensation feature, we are introducing functionality that helps you accelerate their usage - Turbo Upgrading! It will allow you to fully upgrade a car with the touch of a button - provided you have enough Fuse and Upgrade tokens of the required rarity. If you do, you will see three ‘Upgrade Preset’ options on the upgrade screen, as you can see in the image. These correspond to the three most used max upgrade states. If you perform upgrades on your car manually, these options will become greyed out depending on what track you upgraded - for example, if you fully upgrade your engine, you will no longer be able to select the “2.3, 3.3, 3.3” option, so choose carefully! If you use Fuse Tokens, the first 4 car fuses won’t trigger a fuse timer.

We’re introducing a new car status called Legacy Rarity. You can find the filter in the Status section, and it’s currently the last filter in the list.

The Legacy Rarity does not affect the car rarities it requires when fusing. Continuing the example above, if an Epic car becomes a Legendary it will require Epic or Legendary cars to fuse regardless of its Legacy Rarity status.

A car you own gains the Legacy Rarity status if you have it in your garage at the time the correction is released. For example:

This is very important. Acquiring cars after they changed rarity means they don’t have Legacy Rarity status. Legacy Rarity has the following effects:

You can find cars in your garage that are Legacy Rarity by using the Status filter. Tapping on a car to view its expanded card will show an icon similar to the prize car icon. The colour of the Legacy Rarity icon will match the car’s previous rarity.

You will automatically receive Cash if you have leftover tokens once their 31 day duration expires. They have higher value if used to upgrade cars in your collection so try to use as many as possible! The total compensated cash amount depends on whether it’s an Upgrade or Fuse token, and its rarity. 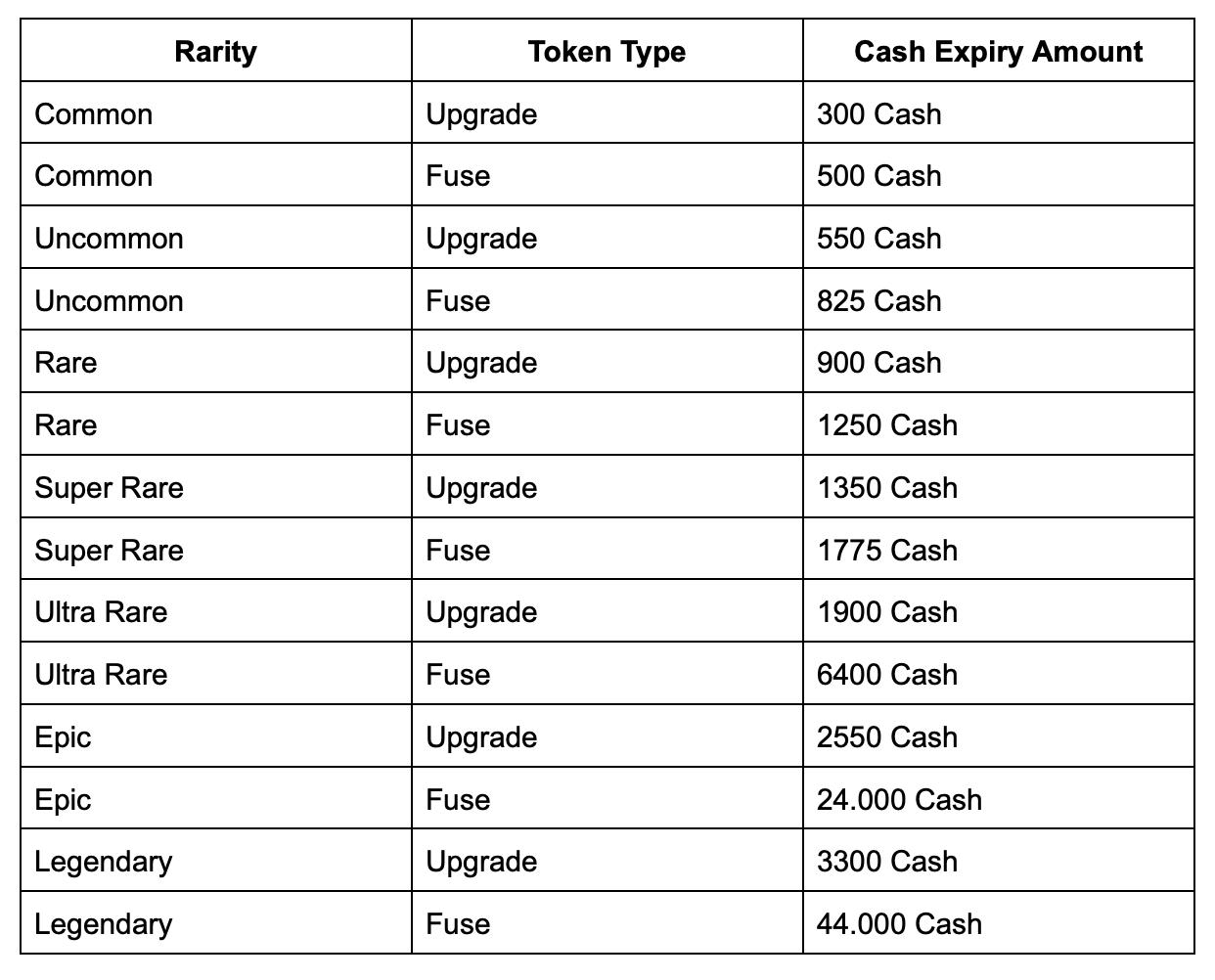 We hope you’re all looking forward to the new update and that you have fun!

What makes a car qualify for resetting its upgrades and issuing Upgrade/Fuse tokens?

A car you own will have its upgrades reset and Upgrade/Fuse tokens issued if its rarity changed. The system works exactly the same if the car’s rarity goes up or down; we don’t differentiate between them.

How can I see how many Upgrade and Fuse tokens I have left?

Upgrade and Fuse tokens are divided by rarity. When they’re issued they’ll match the car’s rarity prior to correction. You can check how many tokens you have left and their remaining duration by tapping to view an expanded card; they'll appear on top of the upgrade menu button. You can also find them in the upgrade menu itself.

Because tokens are divided by rarity, you must perform the above steps on cars of rarities matching the token rarity you want to check.

How long do the tokens last for?

For rarity changes released in 15.0 both Upgrade and Fuse tokens will have a duration of 31 days. The duration starts counting down from the day of the release and not from when you first log in. This means that if you only log in 31 days after the 15.0 release date then all your tokens will have expired and your account will have been updated with the total Cash based on how many and what tokens expired.

How much is the compensation in Cash when the Upgrade and Fuse tokens expire?

Please check the detailed table in the above main section ‘Token Expiry Cash Rewards’. It breaks down the Cash amount per token type and its rarity.

Do cards show if a car had a previous rarity to its new one?

If you owned a car when its rarity changed, tapping on a car to view its expanded card will show an icon in a similar fashion to the prize car icon. The colour of the Legacy Rarity icon will match the car’s previous rarity. Neither the front or back of the card show the car’s former rarity.

How long will a car’s Legacy Rarity status be stored?

How does the Token Compensation system work with cars that already changed rarities in updates previous to 15.0?

The system considers the car’s current rarity - 14.71 update - when issuing tokens. We do not track if you added upgrades and fuses to a car prior or after it changed rarity in a past release so we need to use its current rarity. This behaviour is limited to a small set of cars in the game and will be avoided in the future by having the token compensation system.

How does Legacy Rarity status affect the feature where a duplicate Legendary can be used instead of three Epics/Legendaries to fuse another Legendary?

The quality of life has not been developed yet so please consider the following description as subject to change. Because development hasn’t started yet we’re also keen to hear your thoughts on its design.

Cars with Legacy Rarity status will have different behaviours depending on whether they were promoted to Legendary or demoted to a lower rarity:

If you’d like to know more about the decision-making behind the car corrections, RQ rebalancing and token compensation design, please read this article.